Aliens Ate My Homework releases today on Netflix, Vudu and DVD. If you spent your childhood devouring every sci-fi novel the children’s section of the library had to offer, you probably recognize that name. It’s based on a kids book from 1993 by Bruce Coville, and its attention-grabbing title and premise made it a favorite of weird kids for decades. Coville’s books were the perfect introduction to sci-fi for any budding nerd. Aliens Ate My Homework follows a young boy whose life gets way more complicated with the arrival of miniaturized extraterrestrials with a taste for paper. And now it’s a movie featuring the Captain himself, William Shatner.

Even decades later and in voice only, there really is no actor who feels more at home in the captain’s chair than Shatner. In Aliens Ate My Homework, he voices the miniature ship’s pilot. Though he’s not technically the captain, he’s not sitting in Chekov or Sulu’s seat. The inside of the ship is set up like a much more cramped enterprise, and Shatner’s Phillogenus esk Piemondum (Phil for short) flies the ship from his familiar perch in the back. The movie itself is a fun kids film with some surprisingly good sci-fi action. It’s a fun story about a boy finding some alien friends, learning to get along with his cousin and finding out someone he knows is an evil alien gangster. All this leads to messy slapstick and endless plant puns. It’s exactly the kind of movie I would have picked out at the video store in elementary school.

Of course, my biggest question after seeing it was how Shatner got involved in something like this. Sure, this kind of thing is right up his alley, but when someone asks him to voice a pun-spewing plant puppet, what makes him say yes. I got to ask him. His answer had a lot to do with friendship and Canadian pride.

“There’s all kinds of funny answers to that, but the real answer is Gar and Judy Reese-Stevens wrote it. This couple are Canadian and we’ve worked together on many projects, they’ve become dear friends of mine. They wrote this amusing screenplay and they asked me to play this part, and we recorded it in a studio right near my office. It all worked so well, and it was fun to do. We had many laughs as we tried to think of words and lines. It was cute; I had a good time.”

Yes, some of those lines were contributed by Shatner himself. If you watch the movie, you’ll notice pretty quick that Phil has the most jokes. Usually, they’re plant-based puns, but as you’d expect, there are a few Star Trek gags in there. It sounds like it’s been long enough that Shatner doesn’t quite remember which ones he contributed. (I asked specifically about a particularly amusing Klingon pun.) He told me, “If it was a good joke, it was mine.”

Shatner clearly loves working with the writers of Aliens Ate My Homework. He says that first of all, they’re very talented people. “Second of all they’re very Canadian, so they’re very nice and polite. Very low spoken. When we go out to a restaurant, it’s hard to understand what they’re ordering,” he said. “But they have a great sense of humor and great imagination. They’ve written some novels that have gotten great recognition and sold well, and are great adventure novels that would make really good movies… but they’re great, talented Canadians.”

He described how they became such good friends. “Over the years, we’ve become friends and they come over to the house and we talk about other things than science fiction. In other words, we talk about things that make a friendship,” he said. With people as talented as this behind the movie, if they do make the sequels (the book is the first of a series of four), Shatner would totally do the sequels. “Just don’t tell the producers that,” he said.

This isn’t Shatner’s first-time voice acting, but after years of watching Star Trek, it was an odd experience to hear his voice coming from the captain’s chair, but not see him in it. No matter how many times he does it, voice acting is a different experience from being there on set, and Shatner does miss having other actors to work with.

“You’re standing there somewhat uneasily, wondering what the person who’s in the scene with you, what they’re going to do since they’re not around. You don’t know what it looks like, and you’re kind of flailing around in the dark,” he said. “You really don’t know what the other people are doing, how much energy the other people in the scene are putting out. So if you’re low-energy and the others are high-energy, it doesn’t make for a good scene. One of the characters is out of sync… All that has to be ironed out before you start.” Shatner says that to prepare for any voice acting role, whether its an animated cartoon or a puppet in a live-action film like this one, he has a conversation with the director to figure those issues out.

Shatner, as we all know, is nearly synonymous with science fiction. In his early days, he appeared on The The Twilight Zone and of course Star Trek, and all these years later, he’s still flying around in a space ship. Not only that, he’s written a few science fiction novels. You might say he keeps coming back to the genre, but he really doesn’t see it that way.

Shatner says when we actually do meet aliens, we might not be able to recognize anything about them. “There’ll come a time way in the future when we meet up with entities that don’t behave in our manner. They might not even be carbon-based entities; we don’t know! We don’t know what we don’t know. So all science fiction novels are humanity based. It’s just if you know a little bit about architecture; you might progress the architecture some. Some scientific principles in the lab that are about to come out, you might push that in a direction that extends them into the future, but it just depends on what the environment is. But the people in a science fiction novel are the people of 2018.”

Shatner’s novels, he said, are some of the favorite sci-fi worlds he’s been a part of. They’re about the FBI in space. “I co-wrote them,” he said. “They’re very interesting from a scientific point of view. My co-writer was well-versed in it and I was an admirer. I really liked what he wrote.” Though he wouldn’t say he prefers writing to acting, he does enjoy that writing lets him live in his own world. “The novels are Zero-G and Zero-G 2. The sequel came out last year. And they’re just fascinating to write. We started talking about the spaceships–the spaceship’s pointed and it uses propulsion of some kind–I had become interested in the dhow sailing ship with its triangular sail that was used in the Mediterranean for a long time. So I imagined that this spaceship would have a dhow sail. A triangular sail. Then we made it a triangular sail of reflective material, and it catches the solar wind and goes faster and faster because the wind never stops.”

“Imagine,” Shatner said. “Letting your mind dwell on a sailboat in space. That’s kind of fun.

William Shatner’s latest sci-fi movie is out now, and he says it’s something everyone can enjoy. “It’s a fun movie, it’s good for the whole family. The adults will recognize the humor in it. The kids will love the fact that plants love each other and there’s a nice story to it. It’s a real family picture, and that gives me great pleasure to be able to say.”

Aliens Ate My Homework is out now. 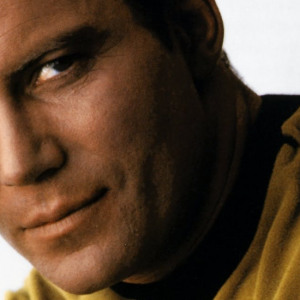